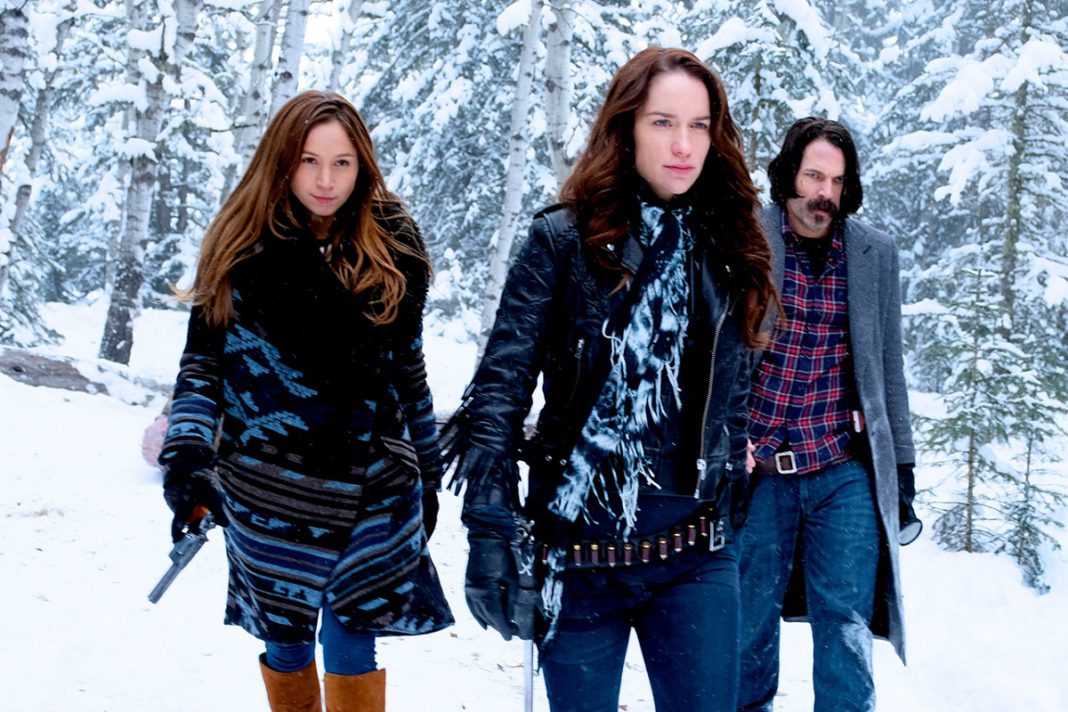 On April 9, 2021, the fourth season of “Wynonna Earp” came to an end but will there be more episodes? Let’s find out if Wynonna Earp season 5 is in the works or if we should bid it goodbye!

Wynonna Earp Season 5: Is There A Slim Chance For A Renewal?

Will Melanie Scrofano who plays Wynonna Earp in the fourth season of the series return to TV? There’s no denying that Wynonna Earp was a popular show, especially among Netflix subscribers. And for those wondering, without further ado, here’s a 2022 update on Wynonna Earp Season 5.

Wynonna Earp: How it all began

Based on the comic book series of the same name, this well-crafted supernatural western is created by Beau Smith that debuted in 1996.

The series was created by Emily Andras and it began airing on Syfy on March 5, 2021 and came to an end on April 9 after twelve episodes, but fiction fans are already asking about a fifth installment. The twelve new chapters of the western supernatural fiction based on Beau Smith’s comic book collection of the same name were announced on June 21, 2018 at the San Diego International Comics Convention.

The show’s story follows the great-great granddaughter of the infamous lawman Wyatt Earp named Wynonna Earp. Armed with unique abilities, she teams up with an immortal Doc Holliday and a dysfunctional group to bring the paranormal and demonic revenants or reincarnated outlaws killed by Wyatt himself to justice.

Due to IDW Entertainment’s financial problems, the start of production for the new season was delayed and on July 2, 2019 it was announced that production would begin in late 2019 and filming would begin in January 2020.

Finally, the filming of the fourth installment of “Wynonna Earp” began in Calgary on January 15, 2020, but was stopped on March 16 due to the coronavirus pandemic, with recordings resuming on July 16, 2020.

So for those wondering if Wynonna Earp will return, the short answer is no. A year ago on February 5, 2021, Syfy (where it first aired) announced that the fourth season would be the last of the series that E! Entertainment Television named “Best New Show” of 2016.

2016 was also the same year it was chosen by Variety as one of the 20 best series.

“I would like to thank our wonderful cast and crew, all of whom were instrumental in bringing Wynonna Earp to our loyal and passionate audience,” showrunner/executive producer Emily Andras said in a statement she shared.

She continued by saying: “We couldn’t be more proud of these last six episodes on SYFY, and we are delighted to share them with our dear fans, who have changed our lives forever. I have been honored to tell the story of Wynonna and her family, and together with Seven24, Cineflix and CTV Sci-Fi it is our hope that we can continue to share her inspiring stories in the future.”

“Every once in a while, a show comes with a powerful message that resonates beyond all expectations among its fans, and for SYFY that show has been ‘Wynonna Earp’” said Frances Berwick, the president of NBC Universal Entertainment Networks.

“We are so grateful to Emily Andras and her incredible team who brilliantly brought to light real issues surrounding identity and sexuality throughout the show’s four seasons. From the beginning, this show connected deeply with our viewers, reaching new fans each season, packing Comic-Con theaters, securing writing award nominations, and even garnering multiple fan-funded billboards in Times Square. To our “Earpers”, we are very proud to have shared such an incredible narrative with all of you. Thank you for your passion and thank you for taking this journey with us.”

Meanwhile, IDW CEO Ezra Rosencraft said, “We’re very proud of ‘ Wynonna Earp ‘ and everyone involved with the show. We thank SYFY for giving such a special show such a great run. Emily’s incredible drive, incredible team and incredible fandom made being a supporting player on her four-season journey a true honor.”

Is there ANY chance of season 5 of Wynonna Earp returning?

Despite everything the fan-favorite has going for it, Syfy hasn’t renewed the series for the fifth time. On February 5, 2021, Syfy announced that the fourth performance would serve as the show’s farewell tour and that it would be the final season.

But it’s important to point out that the show has yet to be canceled by the CTV Sci-Fi Channel, moving out of Wynonna Earp season 5’s status as currently unknown. In addition, Eric Volmers of the Calgary Herald, the newspaper located where the show is filmed, indicated that Seven24 Movies was in talks with American Broadcasters to keep the series notable.

But the chances are slim because, despite the fact that fans mounted an international campaign to keep Wynonna Earp alive for a fifth chapter, it still shut down!

There’s definitely substantial demand for more episodes, and it would be great if someone like Netflix came along and continued the saga of Wyatt Earp’s rogue descendant. It will be interesting to see how things play out in the future of the show, and no one knows what might happen next.

Wynonna Earp has earned several coveted nominations as a hit series and has won multiple honors throughout, including two People’s Choice Awards. Additionally, it was revered by several outlets including Collider, Variety, and E! Entertainment Television as one of the absolute best shows of its time.

Other FAQs about Wynonna Earp:

How many seasons of Wynonna Earp are there?

There have been four seasons released of Wynonna Earp since it arrived on April 1, 2016. All four seasons are available to happily stream to your content level now on Netflix. All four iterations consisted of a total of 49 thrilling entries of action-packed Western thrills and chills. Each captivating episode of the acclaimed Syfy series was around 43 minutes long.

When will Wynonna Earp be filmed in season 5?

What happens at the end of Wynonna Earp?

In “Old Souls” (4×12), great feelings and greater decisions are revealed when a new witch comes to light in Purgatory. The final episode begins with a flashback to a bloody wedding, where the bride throws an ax at her loved ones and then commits suicide.

Back in the present, the protagonists of “ Wynonna Earp” are preparing for the wedding of WayHaught, but a cursed dress threatens to ruin the magical day. To solve the problem, Wynonna seeks out Doc (Tim Rozon), and they track down the witch who sold him to Waverly. Shortly after, Waverly arrests the witch, burns the dress, and gets a new one.

Finally, Waverly and Nicole have a wonderful marriage. Meanwhile, Jeremy gets a promotion at Black Badge and after what happened with Robin he has a nice encounter with a nice caterer, everything seems to indicate that this is the start of a love affair.

For his part, Doc decides to leave Purgatory and start a new life as “just a man”, and although he hopes that Wynonna will accompany him, she feels compelled to remain as the Protector of Purgatory and to take care of his sister Waverly.

However, it is precisely Waverly who convinces her to follow Doc, since her brother also deserves to be happy, besides, she is married to the guardian of the Ghost river triangle, so she does not need so much protection.

Only then does Wynonna come out ready to reach the love of her life and after professing their love for him, they decide to travel together, for the first time, and reunite with their daughter after a long time.

How many episodes of Wynonna Earp season 5 are there?

The official episode count for Wynonna Earp Season 5 has yet to be released. Until it’s officially and concretely revealed that more sign-ups are actually happening, fans should be wise not to expect any updates in that department before then. The first release consisted of 13, and the next two gave fans 12 chapters to enjoy.

The fourth season of Wynonna Earp contained 12 episodes but was released in two parts. So it wouldn’t be crazy to assume that if Wynonna Earp season 5 was going to happen, it would probably be somewhere between 12-13 episodes or less if the series continued.

Who is Waverly Earp?

Waverly Earp has been a main character in the Wynonna Earp series since Season 1. Portrayed by Dominique Provost-Chalkley, she first appears in Purgatory. Born as the descendant of Wyatt Earp, she hoped to be able to put an end to the curse which affects her family. Nonetheless, combining the roles of bartender and consultant for the Black Badges, Waverly is best known for her good humor, her energy and her vast knowledge of the paranormal. Unlike her big sister, Waverly Earp is one of the most well-liked people in Purgatory.

What does the Wynonna Earp season 4 ending mean?

“Old Souls” (4×12) provided a fitting conclusion to “ Wynonna Earp,” a series that debuted in 2016, and in an interview with TVLine Syfy fiction creator Emily Andras spoke about the final chapter.

Regarding the ending, the creator said, “You have to honor all the characters, and by that I mean you have to try to find a moment for every special couple on the show, not just WayHaught. I think it’s important to respect where Waverly and Doc have come from; she never gave up on him, she always saw a better man in him, and now he has become a better man! The relationship between Nedley (Greg Lawson) and Nicole (Kat Barrell), that father/daughter bond is so special, so honoring that it was very important. ”

“And at the end of the day, I still believe the true love story of the show is the Earp sisters, so I ended up making sure that was honored. I really like the parallel to the pilot, where Wynonna came to town against her will and was so hungry to leave but was forced to stay. And now Waverly is sure enough of how their relationship is progressing that he knows Wynonna deserves to walk away because he will be back,” Emily also added.

She also said, “More than anything, it was about giving each character a moment of happiness. Even Jeremy (Varun Saranga) becomes assistant manager of Black Badge and maybe he will find a new partner…. It was about finding everyone a moment of potential joy, having been through so much after four seasons”.