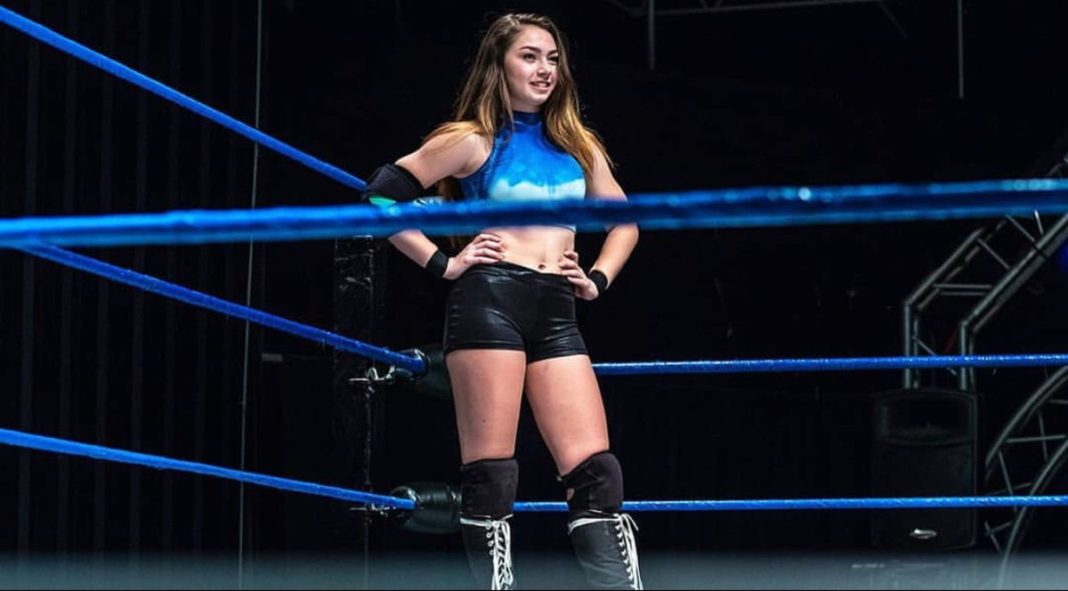 A fresh face in AEW’s women’s division, Skye Blue is a young and talented woman who has gotten a lot of attention ever since she premiered in AEW Dark. Most fans didn’t know about Skye Blue until her AEW debut despite having years of experience as a wrestler and working for numerous promotions. Although not globally popular among fans, this young 22-year-old wrestler possesses a ton of potential and Skye Blue could easily become one of the major stars in wrestling in years to come because the ones who have seen Skye’s work would agree that she is good in the ring.

Who Is The Wrestler Skye Blue? 10 Interesting Facts About The Newbie!

1. Skye Blue In The Ring and Skye Dolecki Outside The Ring:

“Skye Blue” is a very good and eye-catching wrestling name, but this wrestler’s real name is Skye Dolecki, which would be a fine ring-name in itself but is understandable to see why she opted for “Skye Blue” because her costume is on the nose like several other ring names, with notable additions to that list including Bron Breaker.

Skye Blue began her professional wrestling career back in 2017 at a Premier Pro Wrestling event where she lost to another indie wrestler named Sierra. After Her first match, she began working for PPW for a few months, and ended up getting gigs from other local promotions as well.

AEW’s Skye Blue is most likely single based on the information available on the internet (there isn’t much), Skye Blue happens to be very active on social media but hasn’t posted anything about her dating life. In 2020, however, this female wrestler did post an image of the LLT Women’s Champion on Valentine’s Day. And her caption read: “The only valentine I need. No touch. Mine. I will kick you in the face if you try [smiley face].” This means that Blue was single up until a year ago.

4. Skye Has Only One Televised Match In AEW So Far:

Skye Blue vs Jade Cargil back in October on AEW Rampage was Skye’s only match on live television against Jade Cargill (who got an easy one-minute victory over her). Fans who watch AEW Dynamite regularly probably already know that Skye Blue hasn’t wrestled a single match on the show but at the rate Skye is gaining popularity, AEW will probably sign her in the future, letting her get more opportunities in wrestling and work with incredible talents on Dynamite.

5. She Has Become An AEW Regular:

Skye Blue on AEW Dark was the first time fans saw her and the female wrestler made a few sporadic appearances on AEW Elevation. The American wrestler was used as an enhancement talent to put over the likes of Abadon, Britt Baker, and Riho, but after a more competitive match against Red Velvet in her hometown in the United States, she got the crowd firmly on her side, and they showed their support for the lady in blue.

This led to more recognition for the female wrestler, and she has since become a regular member of both of AEW’s YouTube shows, appearing almost weekly at this point, and even managed to make a TV appearance against Jade Cargill on Rampage. She is usually on the defeated end but working with a whole bunch of talent will be beneficial, and her time for victories will certainly come sooner rather than later.

6. She Trained At Premier Academy:

Skye Blue’s wrestling career is still quite young (only four years) but she began her training in Premier Pro Wrestling under the guidance of Randy Ricci. He calls himself the “youngest old-timer” and his “thumbprint” is on wrestlers like CM Punk and Cody Rhodes who is also the CEO of Premier Pro Wrestling. She was given opportunities to wrestle at PPW events, after Skye Blue was deemed ready by her head coach.

She’s 5 Feet 8 Inches Tall meaning, she does have a height advantage despite not being as athletic as some others. Blue’s official height is 5’8″, which in comparison to many other female wrestlers is a few inches more. Skye has lost a ton of matches in AEW alone, she has an over 70% losing rate, despite her size.

One of the reasons why many fans are so taken with Skye Blue is that she’s really young but works incredibly entertainingly in the ring. Blue’s matches in AAW and NWA  (according to those who attended these shows) were really good.

At the same time, however, there are fans who think she’s still learning and needs more experience. Although most of these fans believe that Blue does have the potential to become a huge wrestler, Skye is one of many promising young stars in AEW.

9. She Has Competed In Two War Games Matches:

NXT War Games Cage is more common than fans think, although, in comparison to other match types, they are still quite rare. For the NXT brand, WWE recently brought back WarGames, recovering the old concept from WCW, and AEW established their own version in 2021, under the name of Blood and Guts. However, many independent promotions have also put together their own versions of the stereotypical match type, and Skye Blue has competed in two. She has gone to war in both the BCW and ZERO 1 promotions, wrestling intergender WarGames matches, which is certainly a tall order for someone so new to the business.

One of the names who could potentially help carry women’s wrestling into the future, Skye Blue could very well be on her way to doing that in AEW once given the chance. In just a few short years, she looks to be someone who will have established a strong background on the independent scene. This was after all the reason why she was noticed and picked up by AEW.

After just a few appearances in AEW, which led to her appearance in an episode of Dark in her home state of Chicago, she caught the eye of management. Being someone who possesses a natural likeability as a babyface, Skye Blue was invited to compete at the All Out 2021 PPV that very weekend in the same town, and wrestling fans went wild!

With all this being said, Skye Blue has no doubt had a long career full of success and titles to look forward to as she is quite young and focused!