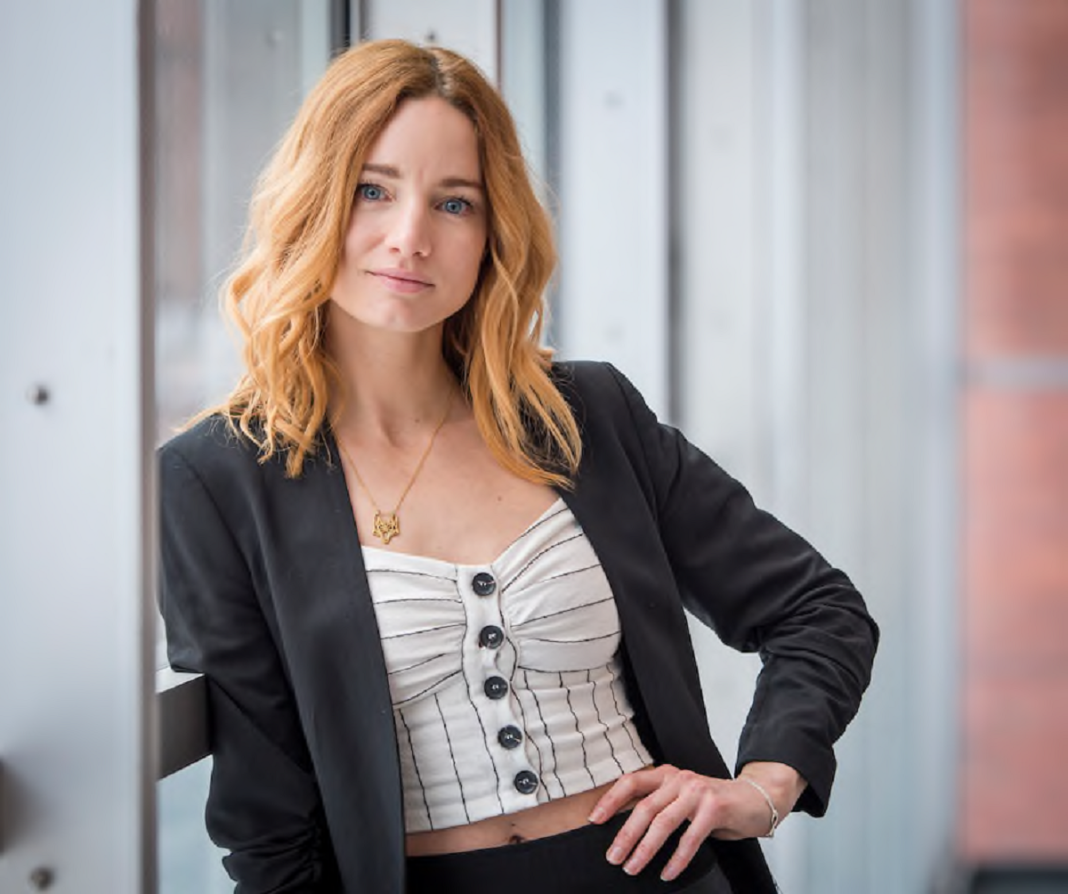 This Canadian actress played Dr. Magalie Leblanc in the 2020 “Transplant” series. As comfortable in English as she is in French, Laurence Leboeuf is a passionate actress who practices her art with daring. Entirely devoted to her profession, which she has practiced tirelessly since the age of 11, and in the footsteps of her parents, she has become one of the darling actresses of her generation.

In the mid-1960s, actor Marcel Lebœuf, originally from Lévis, was making incredible movies. He and his wife Diane Lavallée would have a daughter named Laurence Leboeufborn on December 13, 1985, in Montreal, Quebec.

Born and raised in Quebec, the actress Laurence welcomes opportunities to work in both French or English languages. As a child actress working since the age of 11, she went on to follow in her parent’s footsteps and was soon launched onto the international stage with the release of Turbo Kid. Soon, she became a well-respected Canadian actor as her film was very well received at several festivals, including Sundance, SXSW, and Fantasia Film Festival, amongst others.

3. The release of the feature film Turbo Kid propelled her career internationally:

The film was well received by several prestigious festivals including the Sundance Film Festival, SXSW and the Fantasia Festival.  Then, she starred in Mont Foster, a psychological thriller written and directed by Louis Godbout. The Canadian actress was also given a role in APAPACHO – UNE CARESSE POUR L’AME, shot in Mexico, and scripted and directed by acclaimed director Marquise Lepage.

4. TV series TRANSPLANT was her other major project:

This show would be her second project with the production company Datsit / Sphere Media Plus after the resounding success of 19-2. The medical drama aired in 2020.

5. She started dubbing her voice in French:

In Transplant, Quebec actress Laurence Leboeuf plays in English and doubles in international French for Transplanté, the version broadcast on VRAK. If the exercise is simple enough for her, the young woman still finds it enriching and strange.

This is not the first time that Laurence Leboeuf has doubled. She did it for the Durham County series and for the movie Turbo Kid.

Still, that’s not her job, as she’s not a voice actress and yet the actress loves it as it allows her to have another look at the character. She also said it’s weird for her, as it makes her want to slow down. She said:

“There are things that I would slow down. I don’t know if it’s easier, because I’ve never dubbed someone else’s voice. But I know my flow and my breaths, I imagine it takes a job to adapt to that of another actress”

For her, the biggest difference is that the dubbing is done in international French. The actress must therefore change her accent and erase her Quebecois intonations.

“It’s the same language, but it’s not French that I speak every day. It’s less natural. And it’s funny to say the names of English-speaking doctors with a French accent”, she says.

The decision to double is that of Laurence Leboeuf. Actors and actresses who shoot in their second language have a choice. She said: “We are asked, because dubbing is a job, if you block it can be painful. Some refuse. But, in French, I will find it very strange to have another voice than mine, it’s more natural, it works, and I still have an ease to do it”.

While the actress has signed a four-year exclusivity contract for a lead role in an English-language series and the series has had good ratings, CTV and VRAK have yet to officially announce its renewal. Soon, NBC bought it. Laurence Leboeuf was really happy to hear this!

Laurence Leboeuf’s boyfriend is Martin Matte. He is a comedian.

The couple formed by Martin Matte and Laurence Leboeuf added a new addition to their family in 2020. During the shutdowns from the pandemic, they got themselves a dog!

Yes, it is via his social networks that the popular comedian announced that he had taken advantage of the pandemic to adopt an adorable baby Golden retriever!

Martin and Laurence will soon have a new home and it is in the house of Guillaume Lemay-Thivierge they will settle into soon!

7. Laurence Leboeuf auditioned to be in Le Serpent but it went to a British actress instead:

She had two auditions, in December 2018, to land the role of Marie-Andrée Leclerc.

In Montreal, Laurence Leboeuf recorded three scenes, including the one where the poisoner Marie-Andrée / Monique enters the room of two drugged Dutch tourists. The video was then forwarded to the Mammoth Screen company, which produced The Serpent for the BBC and Netflix.

The producers called her back for a second tryout, but Laurence Leboeuf did not get the role, which was assigned to Jenna Coleman ( Doctor Who ), unable to speak French, as the miniseries proved to us for eight one hour episodes.

Laurence Leboeuf said: “Even if I wasn’t the one who got it, I would have seen an Evelyne Brochu or a Sophie Desmarais in this role,” says Laurence Leboeuf, after a day of filming on CTV’s Transplant TV series in Montreal.

Even worse, according to Laurence Leboeuf, the scene where Marie-Andrée Leclerc calls her mother, Marie-Paule, in Lévis, at the end of the series, consists of incomprehensible French even for French-speaking viewers.

The two pure-wool Quebeckers require the addition of subtitles to decode their exchange. “With the budgets they have, it’s so frustrating to see that,” sighed Laurence Leboeuf.

Jenna Coleman, who does not speak French, plays the role of Marie-Andrée Leclerc alongside Tahar Rahim, who plays the character of Charles Sobhraj. As Laurence Leboeuf had already auditioned for other BBC series, she was in the circuit to seek prestigious roles like that of Marie-Andrée Leclerc, this medical secretary from Lévis who made the headlines, in the middle of the 1970s, after accompanying psychopath Charles Sobhraj on a murderous run in Thailand, Nepal and India.

Catherine St-Laurent, who plays Noélie St-Hilaire in District 31 , also submitted an audition video to play Marie-Andrée Leclerc in Le Serpent. She was also not selected.

Almost forty-five years later, the absurd story of Marie-Andrée Leclerc, worthy of a John le Carré thriller, is still fascinating. How did the secretary of the renowned orthopedic surgeon Georges-Albert Daigle de Lévis, a very pious young woman of 29, succumb to the charm of a serial killer like Charles Sobhraj? If going back and forth in time doesn’t scare you – there are dozens and dozens per episode – The Serpent will charm you with its dangerous exotic adventures.

In an interview with Entertainment Weekly magazine, actress Jenna Coleman revealed that she learned her lines phonetically, with the help of a vocal coach. The actress had only “three or four weeks to master” the French language.

For several years, she has worked with several non-profit organizations including Centraide, Oxfam, and Habitat for Humanity thanks to her passion for humanitarian or environmental causes.

Laurence Leboeuf is also committed to a petition calling for a moratorium on the exploitation of shale gas in Quebec, calling for the construction of houses in El Salvador with Habitat for Humanity, in addition to being the spokesperson for the 43rd edition of the March 2/3 of Oxfam Quebec.