Devin Booker: The Book On The Phoenix Suns Superstar 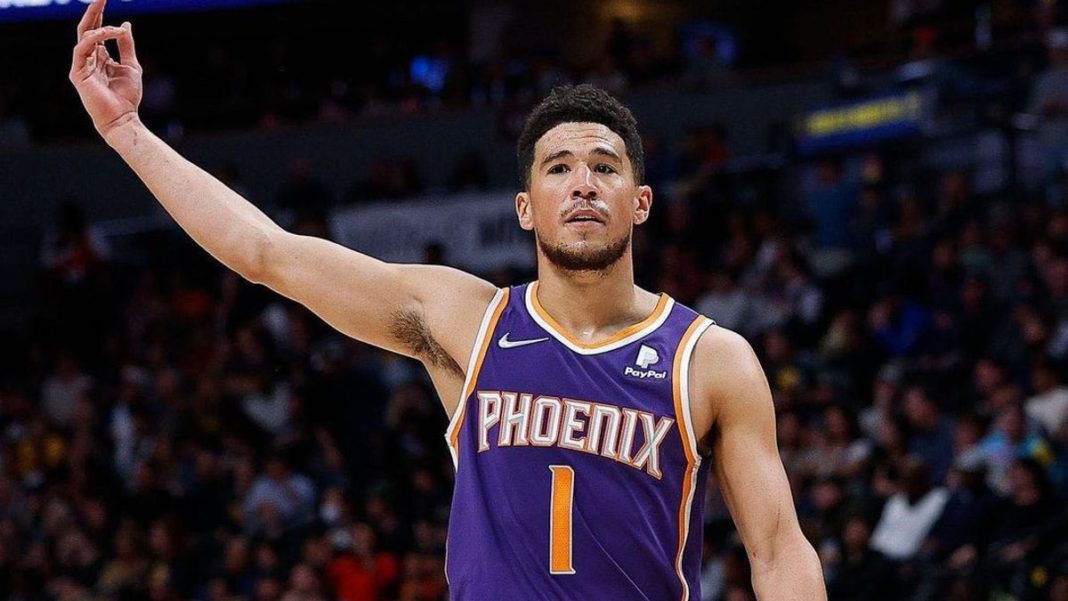 Devin Booker’s arrival in the NBA was as quiet as his game on the court. While he was a star for John Calipari’s Kentucky Wildcats, he wasn’t the most highly touted prospect in the 2015 NBA Draft. Most people were fixated on players like Karl Anthony-Towns, Jahlil Okafor, D’Angelo Russell, Emmanuel Mudiay and Kristaps Porzingis. He wasn’t even the highest drafted player from his college. Karl Anthony-Towns, Willie Cauley-Stein and Trey Lyles were selected before him in the draft. However, as time would go on to show, the Phoenix Suns got a absolute steal with the 13th pick of the draft. Booker soon went on to establish himself as one of the premier scorers in the NBA (notching a 70 point game in the process as well). In this post, we will find a little more about him. Let’s get started.

Who is Devin Booker’s biggest inspiration?

Devin Booker’s incredible scoring proficiency and his obsession with becoming a legend have obtained their first fruits with a feat that only some of the greatest have matched. It is the fruit of hours and hours of work by a young man who had to sacrifice part of his childhood in order to be close to the stars.

The superstar of the Suns had the opportunity to reach the NBA thanks to the effort and sacrifice of his father, who chose to put aside his dream so that his son, who he guessed was a special talent in the world of basketball. It is not surprising, therefore, that the young Devin is very clear about who his true hero is: Melvin Booker.

The former University of Missouri player was one of the best point guards of his generation. However, he had no luck in the 1994 draft. The draft saw much fanfare around the selections of Glen Robinson, Grant Hill and Jason Kidd. Melvin Booker went undrafted in the night and he had to make a living in the CBA on a journey that led him to Hartford, Pittsburgh and finally to the Grand Rapids Hoops.

It was in the city of Michigan, while trying to attract the attention of an NBA team, where he met Veronica Gutierrez, a Puerto Rican by birth and with Mexican blood from her father’s side, with whom he would begin a romance that would culminate on October 30, 1996, with the birth of young Devin. An event that completely changed the life of the couple and especially that of Melvin, who had to quickly change the perspective of his career.

With hardly any opportunities in the NBA (he played 32 games with the Rockets, Golden State and Nuggets jerseys), Melvin had to transform his mentality and went from chasing the dream of every teenager to suddenly maturing and assessing what was the best way to earn a living and support for their little one.

Did Devin Booker grow up in Europe?

Devin Booker’s father had to forget about the NBA, pack his bags and look for life in Europe, where he would make a career for 10 seasons with a good salary to send to his son for support.

Melvin spent about 10 months away from his family and took advantage of the summers to spend them at home in Moss Point, Mississippi. Devin Booker spent a lot of time with his mother. Every year Veronica sat her son in the car and traveled the 1,654 kilometers that separated Grand Rapids from the city of Melvin’s birth, repeating the trip at the end of the summer to pick up her son.

It was in those months with his father that young Booker began to forge his love for basketball.

Melvin took advantage of the little time a year he had with his little boy to help him improve and to teach him the little tricks of a sport that, in his case, allowed him to earn a living. And it was in those months together when the father discovered the talent hidden in his son’s small body.

A talent that was simmering and that in 2007, with Devin about to turn 12, ended up conquering his father’s demanding palate. Melvin was living his second stage as a player in Milan, in the ranks of Armani Jeans, when Veronica, who until then had resisted sending her son on a trip to Europe, agreed to the request of her partner. Gutierrez put Devin on a plane to Italy for spring break.

It was the first time that Devin was going to see his father in action and in addition to attending more than one match of the transalpine squad, the young Booker shared training time with his father and his teammates. Among them was current Nuggets star Danilo Gallinari. Surprised by the ability and, above all, the intelligence of his son, Melvin began to glimpse the future of his offspring.

How did Devin Booker start building himself as a basketball player?

Melvin Booker retired from basketball after his second spell in Milan and began to travel regularly to Michigan to see how his son was progressing on the court. Two years after that, Melvin decided to take a step further in terms of influence in Devin’s life and asked the key question to understand Devin’s evolution: “How good do you want to be?”. The young man did not hesitate in his answer: “I want to be a special player.”

That sentence changed everything and forced young Devin to choose between his mother and father after his freshman year of high school. Melvin spoke with his former partner and warned him of the possibilities of his son if they worked conscientiously from that moment on. Despite resisting at first, the intervention of the young Booker was key in convincing Veronica and allowing him to move to Moss Point to train with his father.

Work began almost immediately as he stepped off the plane. Father and son would get up early each day to go for a run on the beach, hit the court for endless sets of shots, and spend hours in the gym lifting weights. An almost hellish rhythm that was about to make Devin abandon and return to his mother. “But you said you wanted to be a special player,” was Melvin’s phrase every time his son fell apart.

Melvin wasn’t content just coaching his son and watching him play in high school. Every weekend the two would drive for three hours to get to Montgomery, Alabama for Devin to play for Alabama Challenge in the AAU. A total of six hours each weekend in which father and son strengthened their relationship based on conversations about everything that had nothing to do with basketball.

Is Devin Booker a star in Mexico?

Devin Booker hasn’t taken long to make history in the NBA and become a star in Mexico, a country with which he is linked by blood because his grandfather was born in the Aztec country and that he has conquered thanks to two great games against the Mavericks and Spurs in which he had the kind of performances that LeBron James will be proud to have.

The 78 points scored in the two games played in Mexico City are now NBA history and place him as the top scorer in the history of games played in the Mexican capital. In addition, thanks to his two performances in Mexico City, Booker, who was 20 years and 76 days old at that time, became the only player in NBA history along with LeBron James with at least four games scoring 38 or more points at just 20 years old.

How did Devin Booker get to the NBA?

The fruits of this exhaustive work plan were not long in coming. While playing with his father and his friends (he did not shy away from them despite being physically smaller) Devin became the star of Moss Point High School, becoming one of the great benchmarks of basketball excellence in American school basketball, thanks to numbers such as the 30.9 points per game that he was able to average in his last season of high school.

Those numbers eventually led to him becoming a wildly recruited five star university prospect. Offers came to his house from almost every university in the country. Michigan, Michigan State, or Missouri dreamed of rooting with their mother or father to do their dirty work. However, once again, Melvin’s opinion was instrumental in deflecting his son’s choice. Devin appeared before the media to announce that he was going to be a Kentucky Wildcat under legendary coach John Calipari.

One season was enough for him to show the world his tremendous potential and it helped him to mature before making the leap to the NBA. One step away from making history with the ‘Wildcats’ (well, actually two were left to make the perfect season) Booker was one of the great pieces of the team that Calipari built to dominate college basketball. After 38 games with Kentucky, Devin averaged 10 points, shooting over 41% from 3-point range, and two rebounds per game before losing in the Final Four.

It was the end of his college career and the end of his meteoric rise to stardom. A career in which he gained momentum thanks to his father. He went on to be selected 13th by the Phoenix Suns in the 2015 NBA Draft and the rest is history (in the making).