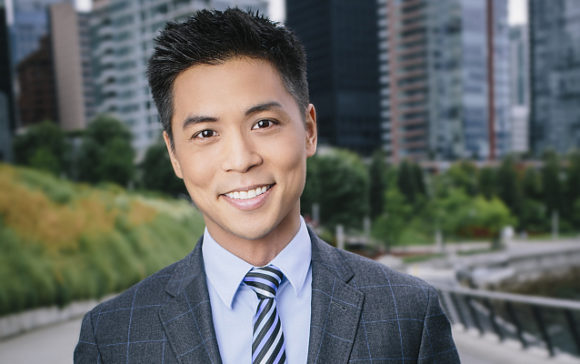 A famous Canadian television journalist, Andrew Chang is one of three co-anchors of CBC Television’s nightly flagship newscast The National. Here are all of his personal data and cool facts about his life behind the lens.

Is Andrew Chang Chinese? An Olympian? Who’s His Wife?

The future journalist came into this world on December 15, 1982 in Ottawa and studied journalism at Carleton University.

He grew up speaking English after his family moved to Quebec. This change also helped him become fluent in French.

As a researcher, Chang joined the CBC in 2004 at CBC Montreal.

Andrew was a part of CBC’s broadcast team for the 2014 Winter Olympics.

Here’s the most interesting part:

On weekends, it’s a different story — when once he worked as a CBC chief staff reporter, he now spends time with his daughters. In addition to snowboarding, he is also quite active as a hiker.

Aside from reporting breaking news at both the local and network level: from the collapse of the de la Concorde overpass in Laval to the Dawson College shootings, he spends his time indulging in one of his many other passions: music. Yes, many don’t know that he’s into music.

Previously he worked as one of CBC chief staff reporters in a month-long stint on the Parti Québécois campaign bus during the 2008 provincial election. Andrew was also working as a video journalist during this time — writing and reporting, interviewing various news-makers, shooting and editing video.

Many folks also don’t know that Andrew spent years producing both news-length and feature-length reports with a camera over his shoulder.

Andrew Chang was in the Olympics:

Was this journalist really a member of  the Olympic Games? Yes, Chang was a member of CBC’s broadcast team between 2014 and 2016.

Who is his wife?

Andrew Chang has been married to Carolyne Stafford since 2012. Together, they have two smart, beautiful, devilish little daughters – Arianna who is 7, and Chloé is 4. “I think of them as my little ninjas: I encourage them to climb and jump on almost anything and everything in our home. Life’s just one big obstacle course anyway, no?”, says the proud father.

According to the National co-host, this is how he and his wife met:

“Caro (Carolyne) and I met at a chemistry party — no joke! She was pursuing her master’s in chemistry. I was a junior reporter at CBC Montreal. Not exactly overlapping social circles, but we had a mutual friend. That night, I remember plopping down on the couch, joining a game of cards, and sharing my hand with a woman whose smile could fill a room. We were scooched in nice and tight.”

According to the journalist, their first date was later that same night: they ducked out from the chemistry party to shoot some pool. Carolyne Stafford grew up speaking French at home, so Andrew spent a good chunk of the night trying to impress Carolyne Stafford with his own French.

Except Andrew was running a big bluff and his vocabulary was terrible back then. Luckily for the man, he tends to have an absolutely impeccable accent when speaking in short bursts. “Oui, bien sûr, j’chouis à l’aise en français!” Needless to say, Carolyne Stafford was very impressed (and the Canadian journalist’s French eventually got much better).

Andrew stated to Streets Of Toronto that the proposal was nervous but had palpable excitement.

“I wanted to propose by a small lake at Mont Tremblant, except I was so nervous we ended up walking the entire circumference of the lake. Like we actually ran out of the lake. I think at this point she wanted to head back to the village and get on with our day, but I insisted we keep walking. She must have been so confused. Fortunately for the both of us, I eventually summoned the courage to drop to one knee and ask the most important question of my life. Her answer was perfect”.

The wedding and honeymoon was also another perfect event.

“Our wedding was in Montreal at the Museum of Fine Arts, in a beautiful glass room overlooking the city — and was more of a party than a wedding. We honeymooned in Hawaii: (on) Big Island and Maui. It was the best trip of our lives. We swam in the ocean with dolphins, hiked for hours to roast marshmallows on flowing lava and almost got swallowed whole by manta rays. The mai tais and pineapple were pretty good too”.